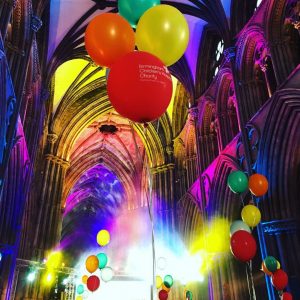 On 23rd July 2016 the Magic of Milly team hosted the Rainbow Ball at Lichfield cathedral. Two hundred and fifty guests attended the event which was blessed with sunshine and guests enjoyed drinks in the grounds of the cathedral before sitting down to a three course meal.

The evening was a huge success and everyone left having had a wonderful time. Friends and family of Milly Hill were joined by staff from Birmigham Children’s Hospital and friends from the community team all of which were totally overwhelmed by the evening.

A live auction took place featuring holidays to Portugal & Ibiza and a silent auction with lots of sporting memorabilia on display. Guests could also buy raffle tickets and helium balloons which contained a selection of wonderful prizes.

A video was also shown which had been put together by the Magic of Milly team, assisted by the staff at the hospital which gave guests a true insight into the impact little Milly had had during her two short years in this world.

The evening raised an incredible £34,000 due to the generosity and hard work of all involved which has now been sent across to Birmingham Children’s Hospital where it will make a huge difference to the lives of children.

The evening would not have been possible without the support of our main sponsors Baldwins Accountants, Dains Accountant, Lichfield Round Table, Barclays Bank Lichfield, City Electrical and Progress Care Solutions. Many local businesses also supported the event offering their services and many raffle prizes which we were truly grateful for.

Guests were left truly wanting more when the evening finished so watch this space…..

Pictures from The Rainbow Ball 2016

On Saturday 27 August 2022, the Magic of Milly team are excited to announce that ‘Strictly for Milly’ is returning, but this time to the Sutton Town Hall! With new dancers and contestants, the 2022 edition is set to be ...

In December 2021, once again the Magic of Milly team were overwhelmed by the incredible generosity of others in our quest to provide emergency ‘kits’ for the parents of children who find themselves in the PICU over the festive period. Quite often, ...